A guide to wildlife in Cornwall

Boasting an abundance of sweeping countryside and extensive coastline, it’s no surprise that Cornwall is a haven for wildlife. From numerous species of birds to marine life, much of Cornwall’s wildlife is hard to come by anywhere else in the country. As a major draw for tourists, many take a short holiday in Looe in search of the many creatures that inhabit the county – here’s our guide to where to discover the wild! 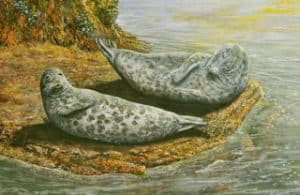 Those staying in Looe during their visit will be able to make the most of a variety of animal and bird hotspots. Local wildlife artist Dick Twinney shares his views on Cornwall, and one of his favourite locations for painting animals in their natural environment.

“The gentle south coast with its sloping fields, rivers, inlets and mixed ancient woodlands are a haven for a great variety of mammals and birds whilst the coastal region itself, estuaries and beaches have their own marine inhabitants, including many species of seabirds, waders, dolphins and seals.

“Visitors to Looe are really spoilt for choice as regards to wildlife watching, but one place I would recommend for nature lovers to visit is Looe Island Nature Reserve (St. Georges Island) managed by the Cornwall Wildlife Trust who organise trips to the island during the summer months. As a place to come and paint, bird watch, walk or just sit and enjoy the view, for me as a wildlife artist, Cornwall has no equal and I would not live anywhere else in the world.” – Dick Twinney

Click here to read more about visiting Looe Island Nature Reserve. It’s worth noting that it is generally only open to the public from Easter until September each year. 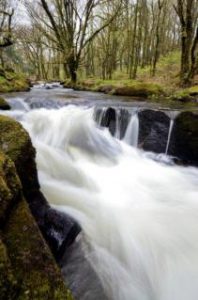 Located just a twenty minute drive away, Golitha Falls is the perfect place to go in search of wildlife while on holiday in Cornwall. This spectacular steeply sided valley is 18 hectares in size, and is lined with ancient woodland, with the River Fowey flowing in-between. The Natural England reserve is designated as a Site of Special Scientific Interest due to its woodland flora, and is also designated as an Area of Outstanding Natural Beauty due to the beautiful cascades caused by the River Fowey.

“The reserve is home to dormice, which reside in the ancient hazel coppice, and noctule, brown long-eared and lesser horseshoe bats have also been recorded. The river supports healthy populations of salmon, eel and sea trout and otters are often seen exploring the falls. The best advice for seeing wildlife is to be quiet and move slowly.”

Whether you simply like to stretch your legs on a brisk walk, or are a hardened hiker, the South West Coast Path offers a variety of routes to help you make the most of the Cornish coastline. What’s more, if you remain alert and keep your eyes peeled, walking provides the perfect opportunity to see some of the county’s most wonderful wildlife.

“At any time of year the South West Coast Path at Looe is a great place to head for to see different types of wildlife. Near to shore there are many chances to spot birds as well as beautiful butterflies and other insects. In rock pools and on beaches you’ll also find marine animals and plants. This provides a great chance to get children active on the beach with a bucket and net. In South Cornwall you are spoilt for choice as to where to see different wildlife. In the late spring look out for basking sharks from the headlands (from a distance off the cliff edges!) and the dazzling displays of flowers that appear at this time.

“These are a couple of walks that are great for spotting wildlife along this part of the coast:

“To have the best chance to see and identify wildlife you might like to take along a pair of binoculars and an illustrated guide like the Collins Guide to Birds, Wildlife or the Seashore so you know what you’ve found.” – The South West Coast Path

As to be expected with the most expansive coastline in the country, Cornwall has an abundance of marine visitors to its shores throughout the year, including seals, dolphins and whales. A great way to catch a glimpse of these magnificent creatures is by enjoying a boat trip along the coast, and Steph from AK Wildlife Cruises describes just what you have the chance of witnessing during a sightseeing tour.

“We have 8 cetaceans (whales, dolphins and porpoises) visiting the coast around Cornwall, which includes our resident harbour porpoises, the smallest cetacean in UK waters, which are no bigger than 2m in length. Other cetaceans include common dolphins and bottlenose dolphins, which are here all year round, killer whales, pilot whales, Risso dolphins, Minke whales and fin whales.

“Marine wildlife can be very unpredictable, as they travel great distances and can dive to great depths, but watching cetaceans in their natural habitat, with their natural behaviour, is the best. I would advise binoculars and whilst out on the boat keep your eyes peeled for splashes, fins and blows. Finally, look out for birds, as if there is activity above the water, for example diving gannets, then there is most likely to be activity below the surface.” – AK Wildlife Cruises 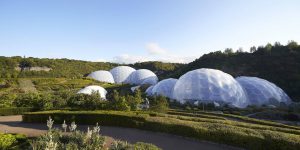 Alongside the spectacular creatures that can be spotted in Cornwall, the county also boasts a fantastic variety of wild plants and flowers. There are numerous nature reserves and walks along the South West Coast Path, which encompass native flora, but the Eden Project in St Austell is also a great place to experience Cornwall’s foliage.

“Eden has an area called Wild Cornwall in the outdoor gardens, which not only provides stunning views of the Biomes and rest of the Eden site, but is also home to lots of varieties of plants often found in Cornwall’s hedgerows and woods as well as on the heathlands.

“We have millions of plants at Eden and thousands of different species and cultivars. Each plant has a story and you can find out details about some of our most popular plants here. As well as native Cornish birds, there is plenty of wildlife in the Biomes, with birds (including Roul-Roul partridges and Sulawesi white-eyes), lizards and frogs in the Rainforest Biome.” = Varshana Trudgian, The Eden Project 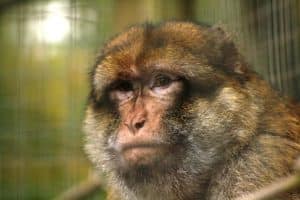 As well as the fantastic wildlife that can be experienced in Cornwall, there are also a variety of animal parks. Those staying in our caravan holiday homes in Looe will be just minutes from the Monkey Sanctuary, which rehomes a variety of different primates, and also has a Cornwall wildlife garden. Here, one of the Monkey Sanctuary’s keepers, discusses how they have improved the life of Joey the capuchin monkey.

“Capuchin monkeys are highly intelligent, social animals and usually live in large troops in the vast and beautiful rainforests of South and Central America. Joey is a capuchin monkey with a sad past who was rescued by the sanctuary in 2007. He was stolen from the rainforest as a baby to become somebody’s pet. He was flown over to the UK and kept in a cage the size of a wardrobe for nine years in a flat in Camden Town, London.

Due to cramped living conditions, poor diet, and lack of sunlight, Joey developed severe nutritional bone disease leading to irreversible disabilities and vets and keepers at The Monkey Sanctuary were initially pessimistic about Joey’s chances of survival. However, he surprised us all and now enjoys a high quality of life at The Monkey Sanctuary. Sadly, Joey’s story is not unique but the generosity and help of our kind supporters allows us to continue to rescue monkeys like Joey and campaign for the others who aren’t so lucky.” – The Monkey Sanctuary