Classy cuisine in Cornwall and the south west

The south west has been known for its love of great food for many years, but more recently this reputation has spread to some of the country’s best loved celebrity chefs who are learning that it’s not just the big cities that appreciate their culinary talents. As Cornish fine cuisine and dining becomes more popular among holidaymakers and locals alike, more and more celebrity chefs are setting up shop in these beautiful southern counties.

This guide will introduce you to some of the most classy and tasty establishments in the south to enjoy on camping and caravanning holidays in Looe Cornwall, to leave you returning home happy and full. 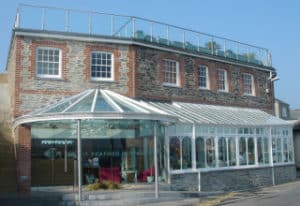 Celebrity chef Rick Stein has been a household name in many kitchens across the country for years and having set up Rick Stein’s The Seafood Restaurant in Padstow back in 1975, the restaurant has become a well-regarded addition to the Cornish holiday. Situated on the Padstow harbour-side, the restaurant is a testament to Stein’s long-established relationship with Padstow and, indeed, Cornwall, having lived there himself since 1965. The restaurant offers its diners an array of fresh fish and seafood on a menu that is inspired by Stein’s travels with fish dishes from Goa, Thailand, Bali and France.

For those not too keen on the inevitable celebrity chef queue, there are a great selection of restaurants on Cornwall’s southern coast. Couch’s Great House in Polperro offers up some exceptional cuisine with head chef Richard McGeown having learnt under such names as Gordon Ramsay, Marco Pierre White and Raymond Blanc. The restaurant offers diners all the warming Cornish spirit you might expect during a stay in summer Polperro holiday homes nearby with all of the class and delicate flavours that may seem more at home in the country’s capital.

Heading back to the culinary delights of Padstow, next up is another famous face in the form of Paul Ainsworth at Number 6. This exceptional restaurant makes the most of seasonal as well as local produce to serve up some exquisite dishes. They pride themselves on their relaxed attitude to fine dining, offering a classy menu that comes in unpretentious and hearty portions.

Those looking for a little more of a traditional vibe from their dining experience might wish to take themselves down to The Old Sail Loft Restaurant in Looe. Sat within one of the oldest buildings in Looe, it gives diners the chance to experience some local culture and architecture whilst tucking into some incredible meals.

It would be wrong not to include some of the fine dining options available in nearby Plymouth, so now we go from the best that Cornwall has to the great eateries just over the border.

Hugh Fearnley-Whittingstall’s lovable TV personality on The River Cottage series is almost as popular with foodies around the country as his fantastic rustic recipes, which is why his River Cottage Canteen and Deli in Plymouth is so prevalent. Having opened in Plymouth’s Royal William Yard in 2011 in the Grade I Listed Brewhouse building, it is another example of great heart-warming cuisine served up in a beautiful atmosphere.

Finally, for those looking for an even more contemporary feel and something a bit different for a posh meal out in the south west, nothing beats celebrity chefs the Tanner Brothers’ Barbican Kitchen. Situated in the world famous Plymouth Gin Distillery, you couldn’t ask for a better location to be tucking into perfectly cooked fillet steak medallions, which is just one of the incredible options on their delectable menu.