Cornwall is a beautiful and popular county with both residents and visitors alike, but so few know much about its history. While it is common knowledge that much of the county’s extensive and spectacular coastline is protected as an Area of Outstanding Natural Beauty, its long and interesting maritime history is still a mystery to some.

Here we delve into the depths of Cornwall’s ships, shipwrecks, lifesaving trusts and organisations and maritime festivals that families can explore whilst staying in Polperro Cornwall holiday homes to give a greater insight into the Cornish mari-timeline.

Even the most landlocked of English residents would be familiar with the blue and orange of the Royal National Lifeboat Institution, but do you know its history?

The RNLI was founded back in 1824 as the National Institution for the Preservation of Life from Shipwreck and has since then been responsible for saving 140,000 lives. While this is an impressive feat, it is important to remember that this has also come at a cost, in the form of 600 lives lost in service.

Providing on call, 24-hour lifeboat search and rescue service and seasonal lifeguard cover, the institution is committed to saving lives and RNLI lifeguards currently patrol 200 beaches in the United Kingdom and the Channel Islands so families can enjoy our coastline with peace of mind. To find out more about the RNLI’s history click here.

From saving shipwrecks to examples of them, the Charlestown Shipwreck and Heritage Centre opened its doors in 1976 and is now home to artefacts from over 150 shipwrecks, including the Titanic.

Since this time the Centre has changed hands and been enlarged to also include a restaurant as well as welcome countless more visitors looking to discover the history and destruction that the mighty sea can cause. Exhibitions not only illustrate famous shipwrecks, but also reflect village life in Charlestown, making it a perfect attraction for those staying not too far away on a coastal holiday in Looe to learn more about the area.

Now perhaps one of the best-known maritime-inspired clothing brands, Seasalt Cornwall was actually established back in 1981. Their first shop opened in Penzance in this year and still stands there today, having begun life as an Army & Navy store ‘General Clothing’ selling government surplus clothing after Don Chadwick bought the shop from previous owner Mrs Strutt.

Seasalt has now become a household name and opened shops in Falmouth, St Ives, Truro, Padstow, Fowey and Wadebridge, as well as Guernsey. Then they expanded into Devon in Salcombe, Exeter and Sidmouth, and then onto Lyme Regis and Chichester before a bumper year in 2014, when Bath, Dorchester, Lichfield, Clarks Village, Marlborough, Southwold, Woodbridge and Dartmouth shops were opened.

As a Cornish fashion company, Seasalt are particularly proud of their maritime roots, supporting Cornish art with the Seasalt Bursary and as proud sponsors of the Falmouth International Sea Shanty Festival.

“Maritime life plays a huge part in who we are. We take our inspiration from the sea, from seaside towns and people who spend their lives on the coast. We can even see the sea from our Design Studio.”

The Cornish Gig Pilot Association was founded in an effort to maintain agreed size and construction for new and existing Cornish Pilot Gigs and be the governing body under the umbrella of British Rowing, which continues to protect the heritage and traditions of the Cornish Pilot Gig and the furtherance of the sport of Gig Rowing.

Gig rowing is a sport that can be seen across Cornwall in particular as it enjoys a strong history in the county. Starting out life as a general work boat, the Cornish pilot gig has since become a popular hobby for many in the county as a way of keeping the Cornish tradition alive. 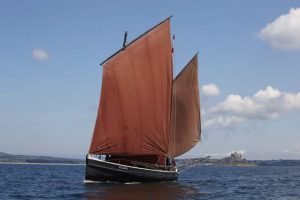 The Cornish Maritime Trust was founded in 1994 and has since supported Cornish maritime heritage as well as looked into new and exciting ways to revive this great Cornish tradition among younger generations with regattas, events and sailing program. The trust is a dedicated charity and is supported by numerous local business, including the aforementioned Seasalt clothing.

“The Cornish Maritime Trust is a charity based in West Cornwall which was formed to enable people of all ages to enjoy classic heritage sailing. The Trust’s mission is to inspire new generations of sailors, as well as the curious of all ages, with these beautiful historic craft and the people who sailed them.

“The Cornish Maritime Trust is committed to promoting Cornish heritage sailing, reaching out to anyone interested in sailing, and giving them the opportunity to expand their maritime horizons. Whether you’re new to sailing or an experienced sailor, the Trust offers sailing for everyone, be it individuals, families, school groups or corporate groups.

“Members are able to enjoy either sailing around beautiful Mount’s Bay, the picturesque Carrick Roads or embark on an exciting voyage to the Scillies or across the Channel to France.

“The CMT own 4 historical fishing vessels which are based in Mounts Bay and Falmouth, with regular sailings throughout the spring/summer season. The Trust’s flagship Cornish Lugger Barnabas was built in 1881, and is the most authentic survivor of the huge fleet of highly skilled mackerel drivers that fished out of St Ives and other West Cornwall ports in the 19th century.

“The Trust’s vessels attend many Cornish and French festivals in order to demonstrate to the thousands of people who attend those events the on-going preservation of Cornwall’s unique maritime heritage and encourage their participation in this.”

Featuring regular temporary exhibitions and displays, visitors return to the museum time and time again on Cornish holidays. With the aim of educating and engaging visitors with Cornish maritime history, the museum in Falmouth is a great and interactive example of how you can get to grips with Cornwall’s pride and joy – its coastline!

“So much more than just a Museum about boats, explore the stories of the people who used these vessels and the adventures they had in them. Ascend the 100ft Look Out tower and see Falmouth’s famous harbour from the skies; descend into the Tidal Zone to appreciate one of only three natural underwater galleries in the world; and be spellbound by a sky filled with a flotilla of flying boats. Explore our maritime heritage and heroes, discover Cornwall’s past, its people and the part they played in making Britain great.”

The first Falmouth International Sea Shanty Festival took place in 2004 and has since taken off in a huge way, attracting not only locals but visitors from far and wide on holiday in the area. Taking place every June, the festival enjoys sea shanties performed by talented groups and attracts tens of thousands of people. With challenges in aid of the RNLI and plenty of other activities going on, all the while being supported by local companies such as Seasalt and Skinner’s Brewery, the festival is great fun for all the family. 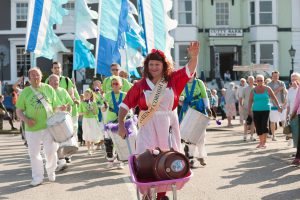 Another popular festival held in the coastal town of Falmouth is the Fal River Festival, which was established in 2006 and has been drawing a crowd ever since.

“This fantastic 10 day festival is a not-for-profit community festival which encompasses over 150 events varying from music and drama, the arts and heritage to gig racing, swimming, walking and lots more.

“The festival was established in 2006 and ran for its 10th year in 2015. It’s a chance to embrace the places, people, history, culture, sport and industry that are connected by this very Cornish river.

“With its diverse mix of events taking place at dozens of locations around the Fal River, the festival offers something for everyone and is the perfect opportunity to engage with life on the river and discover some of its fascinating history.

“Each year more than 100,000 people attend a range of different events helping raise a whopping £75,000 for charity while enjoying 3,000 pints of ale, lager and cider!

“Events lined up for this year include the Fal River Walk, Castle to Castle Swim, Fal Fish Festival, the award-winning Film on the Ferry and the opening Beer Fleet Parade.”