Hall for Cornwall: a guide to Cornwall’s top theatre

Truro’s Hall for Cornwall is arguably the best theatre in Cornwall, but others may disagree and suggest that the impressive Minack Theatre near Land’s End is the top choice. When it comes to a comfortable seat, protection from the elements and great access from all of Cornwall however, the Hall for Cornwall can’t be beaten. 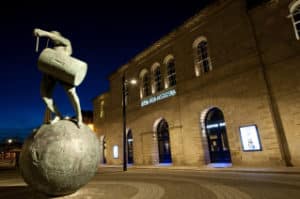 What does the Hall for Cornwall do best?

The Hall for Cornwall is a great theatre offering something for everyone, which helps those who are looking to spend a day out with the kids whilst on a family friendly holidays in Looe in particular. They regularly stage shows and events that are perfect for under-7s, with past shows including the Milkshake gang from Channel 5 and a colourful performance of James and the Giant Peach, and the annual pantomime is always a fun outing for the whole family. When else can you enjoy shouting at the actors in a theatre without getting shushed?

This Cornwall theatre also has plenty to offer in the realm of musical theatre. Many shows that have graced the stage in London’s West End and have gained worldwide fame head to the Hall for Cornwall, whilst cheaper ticket prices than in London along with amazing sets, effects and talented actors mean that choosing to see a musical at the Hall for Cornwall is sure to be worthwhile. Musicals and shows including Evita, Fiddler on the Roof and Stomp have all been performed at the Hall for Cornwall.

A great place to read customer reviews of the Hall for Cornwall is on this TripAdvisor review page.

The building originally housed the Town Hall, courts, police headquarters and fire brigade after it was built in 1846 from local Cornish granite. In 1909 it became a public hall until it was burned down in 1914. It was remodelled as a theatre in 1925 but fell into a state of disrepair during the 1960s, 1970s and early 1980s, although it did become the site of a famous flea market that is still held today. Eventually, the Hall for Cornwall as we know it now was born on 15 November 1997, the date of the first performance to be held there after extensive renovation.

What else is at the Hall for Cornwall?

Although primarily a Cornwall theatre, the Hall for Cornwall is also host to more than this. A restaurant and cafe provide a place to enjoy a bite to eat before a show or as a picturesque coffee stop in the heart of Truro near the River Kenwyn. Truro’s Flea Markets are still held at the Hall for Cornwall and can normally be found in the Boscawen Street Foyer three times a week from 8am-4pm. An up to date list of Flea Market days can be found here.

The Hall for Cornwall is dedicated to helping all of its visitors; no matter whether they are locals or are down staying in new Polperro holiday homes to discover the arts, so as well as having accessible toilets and the offer of assistance for getting from the Lemon Street car park to the theatre, it also puts on a number of accessible performances. Selected shows, these usually being the most popular musicals, plays and pantomimes, also stage signed and captioned performances, audio descriptions and specially relaxed performances that are designed for those with learning disabilities. Meanwhile, touch tours offer visitors the chance to explore the costumes, props and sets of a show before the curtain comes up.

Today, the Hall for Cornwall is the county’s best theatre in which to see a wide variety of plays, music and dance. The what’s on guide on the Hall for Cornwall website offers up-to-date information on which shows are currently scheduled, how many tickets are left and also provides an online booking facility. From opera to Jimmy Carr’s stand-up comedy and from the Moscow City Ballet to contemporary breakdancing and body-popping from Austria’s Nobulus, the Hall for Cornwall has incredible variety.