The top 4 castles in Cornwall

The UK has been home to hundreds of castles over the years, but the combination of dramatic Cornish cliffs, bright teal seas and clear skies means the castles in Cornwall seem more impressive than elsewhere. While staying in a holiday park in Cornwall, why not check out some of the county’s most attractive fortifications? 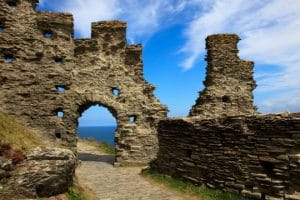 Tintagel Castle may be a little decrepit but when it comes to history and legends, this little corner of the northern Cornish coast is steeped with tales of King Arthur. There have been Roman artefacts including coins and pottery found on Tintagel island that dates back to 270 AD but no signs of a settlement at that early period.

Initially, the site of a medieval monastery, the castle was built in 1233 by Earl Richard. The connection to Arthurian legends is due more to location than the castle itself. Uther Pendragon (Arthur’s father) went to war against the Duke of Cornwall in an effort to steal his wife Igraine who he had fallen in love with. Igraine was sent to Tintagel Castle to keep her safe but with the aid or Merlin and some underhand magic, Arthur was supposedly conceived in Tintagel Castle.

The Arthurian legend is further bolstered by one of Lord Alfred Tennyson’s most famous poems ‘Idylls of the King’ where Tintagel Castle acts as the setting for some of the epic poem. ‘Idylls of the King’ helped to name Merlin’s Cave which within the poem helped carry the infant Arthur to shore and safety. 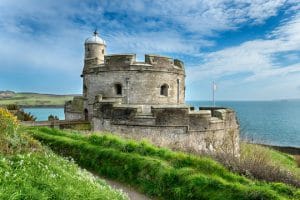 St Mawes Castle is one of Henry VIII’s coastal forts that was built due to tensions with France, the Holy Roman Empire and England. It is petite and picture perfect as this clover shaped castle perches on the cliffs close to Falmouth. Initially, it was home to heavy artillery in an attempt to sink invading ships along with its sister castle of Pendennis that looms on the other side of the estuary.

What makes St Mawes castle so special is that it has been relatively untouched by time. Though it was brought back into service during the Second World War and played host to anti-aircraft guns. It has maintained the Latin inscriptions carved on the castle walls praising Henry VIII and his son Edward VI.

Heather from Heather On Her Travels recommends St Mawes Castle as a perfect addition to a day at the beach:

“St Mawes is a miniature castle that was built by Henry VIII to guard the strategic Fal estuary from invasion. From its tower, you can look across the estuary to see its twin of Pendennis castle on the other side above Falmouth, which you can visit by ferry. It’s a fun place to visit and easily combined with a paddle or swim nearby or a walk around the village of St Mawes with lots of galleries and restaurants overlooking the yachts bobbing the bay.” 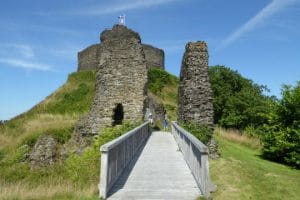 Perched on its natural mound, Launceston Castle is commanding within its circular outer walls. Launceston Castle has a chequered past and is thought to be built following the Norman conquest of England in the 11th Century.

Various Dukes of Cornwall held Launceston Castle, but poor relations with fractious Cornish nobles made residing there permanently an unlikely prospect. Due to the strength of the fortifications, it was often used for judicial assizes and as a gaol throughout the medieval period and notably played a part in the Prayer Book Rebellion in 1549. However, when it was not under the power of the earldom it fell into disrepair, though was still often used as a prison.

During the 1600’s, the Puritan writer John Bastwick was imprisoned at Launceston Castle and even then the state of the castle was noted as ruinous though that did not stop it being held by Royalists through the English Civil War. Since then it has fallen into a number of hands and including the Air Ministry, who used it as offices at the end of the Second World War. 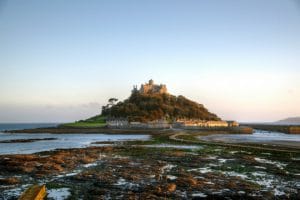 St Michael’s Mount is one of the most iconic sites off the Cornish coast and has attracted the notice of locals and visitors alike. Twinned with Le Mont Saint-Michel in Normandy thanks to being similar tidal islands and the home of monasteries, the French equivalent is a lot larger and is named after a sighting of Archangel Michael.

The island was given to the Benedictine order that inhabited Mont Saint-Michel by Edward Confessor in the 11th Century and became the destination for many pilgrims over the years. In the 17th Century, the monastery was turned over to the St Aubyn’s family who incorporated the older structure into that of the castle and it now stands well preserved with different eras on show in the different rooms.

Its causeway appears at low tide, allowing visitors to walk to the island and it has a legend of being created by a Cornish giant named Cormoran. The giant was killed by a local named Jack with the aid of a hole dug under the cover of darkness and this is further evidenced by the heart-shaped stone that appears in the causeway. If you stand on the stone and listen, you can still hear the heartbeat of the Giant that is trapped underneath.

Kayleigh from Candy Floss Dreams loved her day trip to St Michael’s Mount:
“St Michael’s Mount is located in a really unique setting. I really enjoyed walking across the causeway to visit the mount. During high tide there is the chance to get a boat ride back, however, we were still able to walk back. The staff at the Mount were incredibly helpful and made for a pleasant trip.” 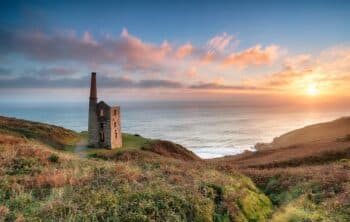 What to do in Cornwall in April? 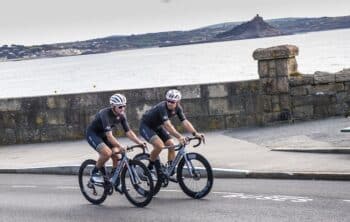 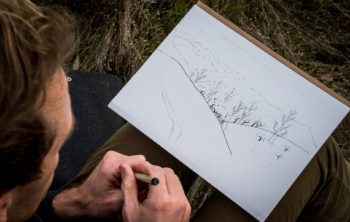 Inspiring Places To Draw And Paint In Looe